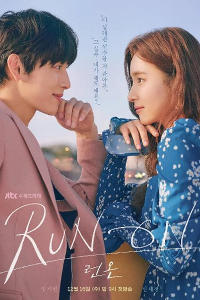 Run On is a South Korean television series starring Im Si-wan, Shin Se-kyung, Choi Soo-young and Kang Tae-oh. It premiered on JTBC on December 16, 2020 and is available for streaming worldwide on Netflix.

Run On tells the love story of Ki Seon-gyeom, a former sprinter who is working to become a sports agent on JTBC, and Oh Mi-joo, a subtitle translator.