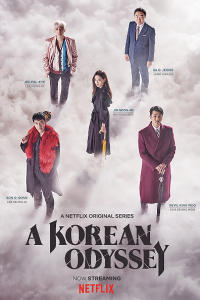 A Korean Odyssey is a South Korean television series starring Lee Seung-gi, Cha Seung-won, Oh Yeon-seo, Lee Hong-gi and Jang Gwang. Written by the Hong sisters, the drama is a modern spin-off of the Chinese classic novel Journey to the West. It aired on tvN starting December 23, 2017 every Saturday and Sunday at 21:00 (KST).

In 2017, Son Oh-Gong and Ma-Wang are in conflict with each other as they look for a true light in a dark world where evil thrives. Having made a contract with Seon-mi 25 years ago, entitling her to seek help from Son Oh-Gong whenever she calls him in exchange of letting him free, the two meet again in a fateful encounter. From there, Son Oh-Gong is bound to his protective role towards Seon-mi, the little girl he had met years ago.