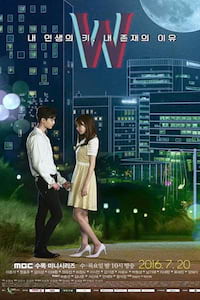 The series focuses on the eponymous fictional webtoon entitled W, written and illustrated by its legendary author and illustrator Oh Seong-moo (Kim Eui-sung) which begins to function on its own, like a distinct reality. W became so famous in South Korea that even its printed versions became best-sellers there.[cont.]

[About:]
'W Two Worlds Apart' is a 2016 South Korean television series, starring Lee Jong-suk and Han Hyo-joo. Consisting of 16 episodes, it aired on Wednesdays and Thursdays at 22:00 (KST) on MBC from July 20 to September 14, 2016. W centers on the clash between "two worlds": the real world and an alternate universe inside a webtoon, from which the title of the television series was taken.

The series received praise for its unique premise and ranked first in Content Power Index in its premiere week. It achieved modest ratings of 11.63%, topping viewership ratings in its time slot for its entire run.