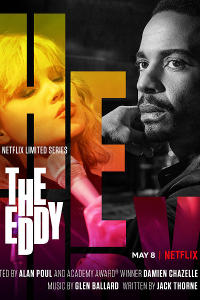 The Eddy is an upcoming American musical drama television series created by Damien Chazelle and written by Jack Thorne. Chazelle will direct the opening two episodes of the series, with original music written by Glen Ballard. The series will be set in Paris, and will feature dialogue in English, French and Arabic. The series will consist of eight episodes and will stream on Netflix.