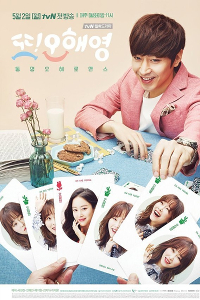 Romance, Comedy, Drama
Be the first to rate this

Park Do-kyung (Eric Mun) is a sound director in his 30s. A year ago, his bride, Oh Hae-young (pretty) (Jeon Hye-bin), disappeared on their wedding day leaving him miserable. One year after that incident, Do-kyung was told that Hae-young is going to marry a young entrepreneur named Han Tae-jin (Lee Jae-yoon). Do-kyung exacted revenge by sabotaging Tae-jin's business leaving him bankrupt. However, the woman who has the name Oh Hae-young (plain) (Seo Hyun-jin) was actually just a stranger who coincidentally has the same name as the other Oh Hae-young (pretty) who left him.[cont.]

[About:]
'Another Miss Oh' is a South Korean television series starring Eric Mun, Seo Hyun-jin, Jeon Hye-bin. It replaced Pied Piper and broadcast on cable network tvN on Mondays and Tuesdays at 23:00 (KST) time slot for 18 episodes from May 2 to June 28, 2016.

The series held the record highest audience rating for a tvN Monday-Tuesday show and became one of the highest rated Korean dramas in cable television history. The drama was extended by 2 episodes and 2 specials.