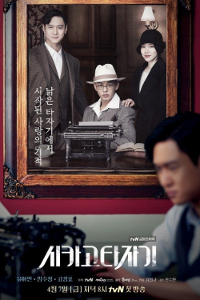 The series depicts three resistance fighters who lived during the 1930s Japanese occupation of Korea, and are reincarnated into the present as a best-selling writer in a slump, a fan, and a ghostwriter.

It is an epic story of comradeship, friendship, love and betrayal that lasts 80 years. As the trio of writer, ghostwriter and fan race against time to find the truth of the past that haunts them, will their discovery affect their present?

[About:]
'Chicago Typewriter' is a 2017 South Korean television series starring Yoo Ah-in, Im Soo-jung and Go Kyung-pyo. It ran from April to June 2017, with episodes every Friday and Saturday at 20:00 (KST) on tvN.