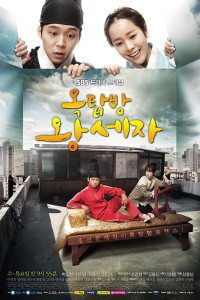 Tae-mu (Lee Tae-sung), after killing his lost cousin in the United States, returns to Korea, claiming that his cousin, Tae-yong (Park Yoochun), could not be found in New York City. Meanwhile, Tae-mu has been having a secret affair with Se-na (Jeong Yu-mi), his secretary, who, in turn, runs into her long-lost stepsister Park-ha (Han Ji-min). Park-ha has been missing for a prolonged period of time and it is revealed that she was in the US after Se-na abandoned her in a truck driving away when she was nine.[cont.]

[About:]
'Rooftop Prince'  is a 2012 South Korean fantasy romantic comedy television drama, starring Park Yuchun, Han Ji-min, Jeong Yu-mi, Lee Tae-sung, Lee Tae-ri, Jung Suk-won and Choi Woo-shik. It is about a Joseon crown prince who, after his wife dies mysteriously, time travels to the future where he encounters familiar faces, modern-day devices, and corporate intrigue. The series aired on SBS from March 21 to May 24, 2012 on Wednesdays and Thursdays at 21:55 for 20 episodes.