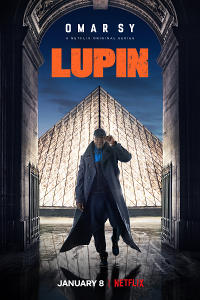 The story follows professional thief Assane Diop, the only son of an immigrant from Senegal who had come to France to seek a better life for his child. Assane's father is framed for the theft of an expensive diamond necklace by his employer, the wealthy and powerful Hubert Pellegrini, and hangs himself in his prison cell out of shame, leaving the teenage Assane an orphan. Twenty-five years later, inspired by a book about gentleman thief Arsène Lupin his father had given him on his birthday, Assane sets out to get revenge on the Pellegrini family, using his charisma and mastery of thievery, subterfuge, and disguise to expose Hubert's crimes.

[About:]
Lupin is a French mystery thriller streaming television series created by George Kay and François Uzan that premiered on Netflix on 8 January 2021. The series consists of 10 episodes, released in two parts.

The show stars Omar Sy in the role of Assane Diop, a man who is inspired by the adventures of master thief Arsène Lupin, a character created by Maurice Leblanc in the early 1900s.[2] The first part, consisting of five episodes, is subtitled Dans L'Ombre D'Arsène (In the Shadow of Arsène), referring to the primary character's inspiration.

The second set of five episodes, already filmed by the end of 2020, is slated to be released in mid-2021.