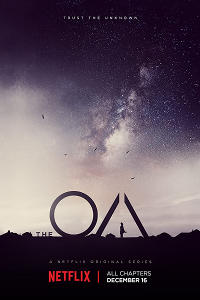 The OA is an American mystery drama web television series with science fiction, supernatural, and fantasy elements. The OA debuted on Netflix on December 16, 2016. Created and executive produced by Brit Marling and Zal Batmanglij, the series is their third collaboration. The series consists of two seasons of eight episodes each, nearly all directed by Batmanglij, and is produced by Plan B Entertainment and Anonymous Content. In the series, Marling stars as a young woman named Prairie Johnson who resurfaces after having been missing for seven years. Prairie now calls herself "The OA" and can see, despite having been blind before her disappearance.

On February 8, 2017, Netflix renewed the series for a second season, dubbed "Part II", that was released on March 22, 2019. Although The OA was planned by its creators to be a five-part story told in five seasons, on August 5, 2019, Netflix canceled the series after two seasons, leaving the show with a cliffhanger ending. The OA received generally favorable critical reception, averaging 77% on Part I and 92% on Part II on Rotten Tomatoes. The series' directing, visuals and acting were often singled out, as was its social impact.