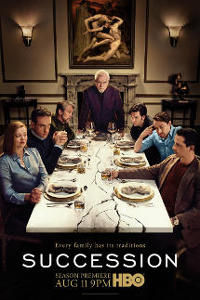 Comedy, Drama, Satire
Be the first to rate this

Succession is an American satirical comedy-drama television series, created by Jesse Armstrong, that premiered on June 3, 2018, on HBO. The series centers on the fictional Roy family, the dysfunctional owners of a global media empire who are fighting for control of the company amidst uncertainty about the health of the family's patriarch, Logan Roy. The series stars an ensemble cast featuring Hiam Abbass, Nicholas Braun, Brian Cox, Kieran Culkin, Peter Friedman, Natalie Gold, Matthew Macfadyen, Alan Ruck, Parker Sawyers, Sarah Snook, Jeremy Strong, and Rob Yang, with Dagmara Domińczyk, Arian Moayed and J. Smith-Cameron in recurring roles, before being promoted to the main cast for the second season. In June 2018, it was announced that the series had been renewed for a second season, which premiered on August 11, 2019.

Succession follows "the Roy family – Logan Roy and his four children – who control one of the biggest media and entertainment conglomerates in the world. The series tracks their lives as they contemplate what the future will hold for them once their aging father begins to step back from the company."