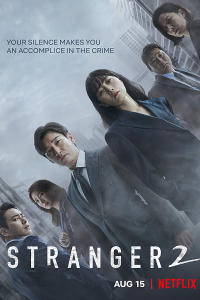 Stranger is a South Korean crime thriller drama television series. Produced by Signal Entertainment and IOK Media, it was created by Studio Dragon writer Lee Soo-yeon and broadcast on tvN from June 10, 2017. The series stars Cho Seung-woo and Bae Doona as prosecutor and police lieutenant detectives teaming up to solve a mysterious murder case and uncovers a larger corruption scheme within the government on the way.

Stranger was nominated for various accolades, and on the Grand Prize for Television at the 54th Baeksang Arts Awards. The New York Times listed it their Tenth Best TV Show of 2017. The series was renewed for a second season, which is scheduled to air on August 15, 2020.

Hwang Si-mok is an exemplary prosecutor who suffered from hypersensitivity to certain frequencies of sound. After undergoing a corrective surgery, he lost his sense of empathy and lacks of social skills. While investigating a serial murder case, he meets police lieutenant Han Yeo-jin, who assists him in solving it. As they begin to unravel the mystery behind the murders, they also discover that their efforts are being continuously foiled as expounding them will also lead to unfold the secrets about a larger scheme of corruption between the government's Public Prosecutor's Office and a private conglomerate.

In the second season, an ethical dispute arises within the Prosecutor's Office and the National Police Agency, with the former wanting discretionary power over all investigative proceedings while the latter seeks for an autonomous authority. In the midst of their respective agencies' conflict, Shi-Mok and Yeo-jin team up to independently conduct their own investigation on a concealed case.