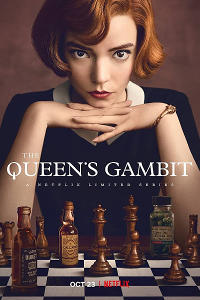 The Queen's Gambit is an upcoming American drama web television miniseries developed by Scott Frank and Allan Scott. The series is based on the 1983 novel of the same name by Walter Tevis. It is scheduled to premiere on October 23, 2020 on Netflix.

The Queen's Gambit centers the "life of an orphan chess prodigy" named Beth Harmon "from the age of 8 to 22 as she struggles with addiction in her quest" to become a Grandmaster in chess.