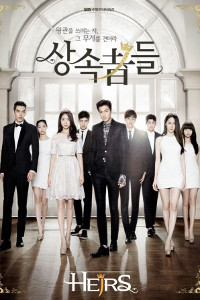 The series follows a group of rich, privileged high school students as they are about to take over their families' business empires, overcoming difficulties and growing every step of the way.

Kim Tan (Lee Min-ho) is a wealthy heir to a large Korean conglomerate called Jeguk Group. He was exiled to the U.S. by his brother Kim Won (Choi Jin-hyuk), who tries to take control of the family business. While in the States, he meets Cha Eun-sang (Park Shin-hye), who went there to look for her sister. Despite being engaged to Yoo Rachel (Kim Ji-won), a fellow heiress, Kim Tan soon falls in love with Eun-sang. When Kim Tan returns to Korea, his former best friend turned enemy Choi Young-do (Kim Woo-bin) begins picking on Eun-sang to irritate Tan. Tension ensues when Young-do also falls in love with Eun-sang, and Kim Tan is forced to choose between his responsibility of pursuing the family business or love.

[About:]
'The Heirs' also known as The Inheritors, is a South Korean television series starring Lee Min-ho, Park Shin-hye and Kim Woo-bin. Written by Kim Eun-sook, the drama is set in a high school populated by the privileged and uber-rich. It aired on SBS from October 9 to December 12, 2013.

Due to its star-studded cast and writer Kim Eun-sook (who previously wrote Lovers in Paris, Secret Garden and A Gentleman's Dignity), international broadcasting rights were sold to 13 countries. It had the highest selling price in Japan among all the 2013 Korean dramas at US$30,000 for each episode.  And as of January 26, 2014, the series has garnered more than one billion views on Youku, China's biggest video streaming site.