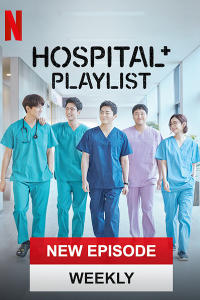 Hospital Playlist tells the story of doctors and nurses working at Yulje Medical Center. It focuses on five doctors who have been friends since they entered medical school in 1999.

[About:]
Hospital Playlist is a South Korean television series written by Lee Woo-jung and directed by Shin Won-ho. It is the second installment of the Wise Life series, following Prison Playbook (2017–18). It stars Jo Jung-suk, Yoo Yeon-seok, Jung Kyung-ho, Kim Dae-myung and Jeon Mi-do. The first season aired on tvN every Thursday from March 12 to May 28, 2020. By the conclusion of the first season, it became the ninth highest-rated Korean drama in cable television history. The second season is set to air in 2021.