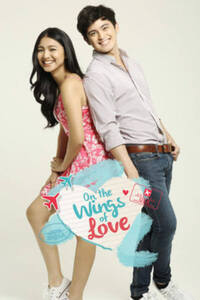 On the Wings of Love is a 2015 Philippine romantic comedy drama television series directed by Antoinette Jadaone and Jojo Saguin and starring James Reid and Nadine Lustre in their first primetime television series. The series aired on ABS-CBN's Primetime Bida evening block and worldwide on The Filipino Channel from August 10, 2015 to February 26, 2016, replacing Bridges of Love and was replaced by The Story of Us.

The romantic comedy centers around two people — Clark, a boy living his American life, and Leah, a simple girl with an American dream, who are forced to marry in order to legally stay and continue working in the United States.

The show ended on February 26, 2016 and this episode was divided into two parts: a recorded segment and followed by a live viewing party in Ynares Center, Antipolo. It was also simulcasted live on ABS-CBN and worldwide on The Filipino Channel.