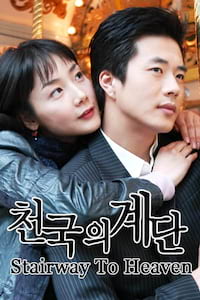 Han Jung-suh (Choi Ji-woo) and Cha Song-joo (Kwon Sang-woo) are childhood friends and have a special bond that blossoms into love. They both share the pain of losing a loved one: Song-joo's father died in a traffic accident and Jung-suh's mother died of eye cancer. Jung-suh's father (Ha Jae-young) marries an actress named Tae Mi-ra (Lee Hui-hyang), who brings her real daughter, Han Yoo-ri (Kim Tae-hee), and son, Han Tae-hwa (Lee Wan) into the household. Yoo-ri is jealous of Jung-suh, making her look terrible in front of her mother, who begins to turn on Jung-suh. When Jung-suh's father leaves for work, her stepmother assaults her. She thwarts Jung-suh's attempts to study abroad with Song-joo, who then leaves for America alone. Mi-ra plots for Yoo-ri to win the affections of Song-joo who is the heir of his family fortune. All the while, Jung-suh tries to be nice to Tae-hwa, but he mistakes her friendship for something more, and falls in love with her. [cont.]

[About]
Stairway to Heaven is a 2003 South Korean television series starring Choi Ji-woo, Kwon Sang-woo, Kim Tae-hee, and Shin Hyun-joon. It aired on SBS from 3 December 2003 to 5 February 2004 on Wednesdays and Thursdays at 21:55 for 20 episodes. The title of the show comes from the Led Zeppelin song of the same name, which is frequently used in the underscore.

The drama is the second entry in director Lee Jang-soo's Heaven Trilogy which included Beautiful Days in 2001 and Tree of Heaven in 2006. The drama was a hit and received an average viewership rating of 38.8%, and 45.3% for the finale.