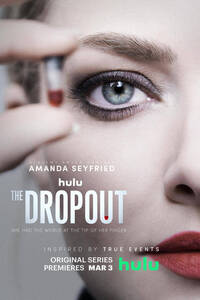 The Dropout, based on the eponymous ABC Radio podcast, is about the rise and fall of Elizabeth Holmes and her company, Theranos.

[About]
The Dropout is an upcoming American television drama series based on the podcast The Dropout by Rebecca Jarvis and ABC Radio. The series was set to star Kate McKinnon as Elizabeth Holmes and premiere on Hulu; however, McKinnon exited the project in February 2021. The following March, Amanda Seyfried was recast in McKinnon's place.