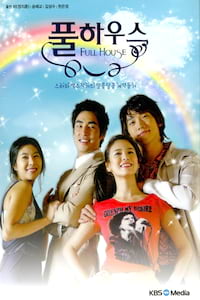 Han Ji-eun (Song Hye-kyo), an aspiring scriptwriter, lives in a house called "Full House" built by her late father. One day, her two best friends trick her into believing that she has won a free vacation. While she is away, they sell her house. On the plane, she meets a famous actor named Lee Young-jae (Rain). Through comedic events, they get acquainted during her vacation and when she returns, she discovers that her house has been sold to him.

Though they do not get along with each other due to their contrasting habits, they agree to live with each other. At first, Ji-eun works as his maid in order to buy her house back. However, later, they enter into a contract marriage as Young-jae wanted to make his crush, Kang Hye-won (Han Eun-jung), jealous. Complications arise as Ji-eun and Young-jae become attracted to each other.

[About:]
'Full House' is a 2004 South Korean television series starring Song Hye-kyo, Rain, Han Eun-jung and Kim Sung-soo. Based on the manhwa Full House by Won Soo-yeon, the romantic comedy series aired on KBS2 on Wednesdays and Thursdays at 21:50 (KST) timeslot for 16 episodes from July 14 to September 2, 2004.

Considered a pioneer of the "romantic comedy" genre in Korean drama, the drama was a great success in Asia and helped propel the Korean Wave.