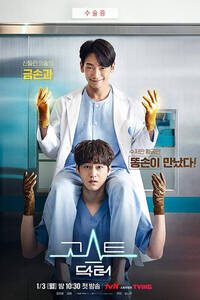 Fantasy, Medical Drama
Be the first to rate this

The series revolves around two doctors from extreme backgrounds, who are complete opposites, with opposite personalities and medical skills. Cha Young Min is a genius doctor with extraordinary surgical skills, but is very arrogant and selfish. On the other hand, Seong Tak is the grandson of the founder of Myungshin Hospital and son of the Chairman of that hospital. He is the luckiest and richest resident doctor.

[About:]
Ghost Doctor is an ongoing South Korean television series directed by Boo Seong-cheol and starring Rain, Uee, Kim Bum and Son Na-eun. The series revolves around two doctors from extreme backgrounds and skills merging into one person. It premiered on tvN on January 3, 2022 and airs on Mondays and Tuesdays at 22:30 (KST) time slot. It will also be available for streaming on TVING, iQiyi, and Viu.