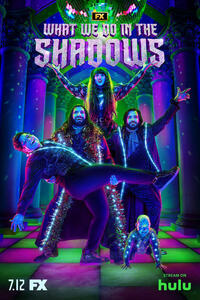 Comedy, Fantasy, Horror
Be the first to rate this

What We Do in the Shadows is an American mockumentary comedy horror television series created by Jemaine Clement that premiered March 27, 2019, on FX. The second television series in the franchise based on the 2014 film of the same name written by Clement and Taika Waititi, the series follows four vampire roommates in Staten Island, and stars Kayvan Novak, Matt Berry, Natasia Demetriou, Harvey Guillén, and Mark Proksch.