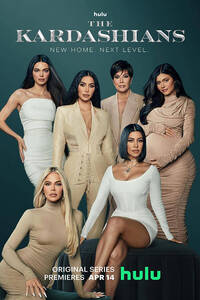 Drama, Reality-TV
Be the first to rate this

The Kardashians is an American reality television series which focuses on the personal lives of the Kardashian–Jenner family. The new show comes off the heels of their last show called Keeping Up with the Kardashians which concluded in June 2021 after a 20-season run on E!.

The series focuses mainly on sisters Kourtney, Kim, and Khloé Kardashian and their half-sisters, Kendall and Kylie Jenner, and their mother, Kris Jenner. It also features the current and ex-partners, respectively, of the Kardashian sisters, including Travis Barker, Kanye West, Tristan Thompson, and Scott Disick.

The Kardashians premiered on April 14, 2022 on the streaming service Hulu; its first season consisted of 10 episodes. As part of a pre-planned two-season launch, Hulu announced a second season in July 2022, which is expected to premiere on September 22, 2022.