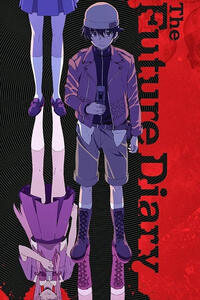 Future Diary is a Japanese manga series written and illustrated by Sakae Esuno. It was serialized in Kadokawa Shoten's Shōnen Ace between January 2006 and December 2010, and has been collected into 12 tankōbon volumes. The plot depicts the Diary Game, a deadly battle royal between 12 different individuals who are given "Future Diaries", special diaries that can predict the future, by Deus Ex Machina, the God of Time and Space, with the last survivor becoming his heir.

The manga has been licensed by Tokyopop, and ten of the English volumes were released, with a release for the last two now uncertain due to Tokyopop ceasing publishing in North America. A "pilot anime" DVD was released with the 11th manga volume in December 2010. A 26-episode anime television series produced by Asread, aired in Japan between October 2011 and April 2012. Funimation has licensed the anime for distribution in North America. An 11-episode live-action television drama aired between April and June 2012.

Esuno has also authored three side-story manga, each one spanning five chapters: first Future Diary: Mosaic which focuses on another Diary Holder, Minene Uryu, and tells unrevealed plot points of the main story; in 2009–2010, Future Diary: Paradox (published in Young Ace), which tells the exploits of Aru Akise and Muru Muru set in an alternate timeline, and in 2013, Future Diary: Redial, which serves as an epilogue to the series.