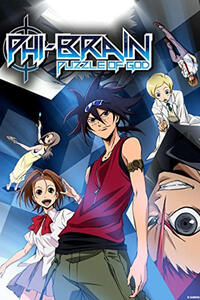 Kaito, a puzzle-loving high school freshman, is selected as a candidate for "Phi Brain". He and his friend Nonoha find an "unsolvable puzzle" near their school. The puzzle turns out to be a life-threatening "philosopher's puzzle" created by the mysterious group P.O.G. (Puzzle Of God). After successfully solving the puzzle, Kaito is designated as a Solver and is joined by other Solvers as they battle P.O.G. all over the world by solving the "philosopher's puzzles".

[About]
Phi Brain: Puzzle of God is a 2011 Japanese anime television series produced by Sunrise. The first two series aired on NHK Educational TV between October 2011 and September 2012, with a third season airing as of October 2013. The series is directed by Junichi Sato with script supervision by Mayori Sekijima. Hajime Yatate, the collective pen name for the creative staff at Sunrise, is credited with the original story. The anime has been licensed in North America by Sentai Filmworks. A manga adaptation by Yoshiki Togawa was serialized in Kadokawa Shoten's Newtype Ace magazine from November 2011 to December 2011. A PlayStation Portable video game by Arc System Works was released on May 31, 2012.