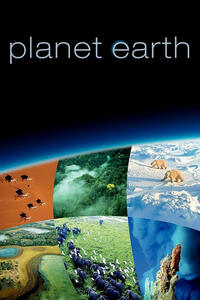 Planet Earth is a 2006 British television series produced by the BBC Natural History Unit. Five years in the making, it was the most expensive nature documentary series ever commissioned by the BBC and also the first to be filmed in high definition. The series received multiple awards, including four Emmy Awards, a Peabody Award, and an award from the Royal Television Society.

Planet Earth premiered on 5 March 2006 in the United Kingdom on BBC One, and by June 2007 had been shown in 130 countries. The original version was narrated by David Attenborough, whilst some international versions used alternative narrators.

The series has eleven episodes, each of which features a global overview of a different biome or habitat on Earth. At the end of each fifty-minute episode, a ten-minute featurette takes a behind-the-scenes look at the challenges of filming the series.

Ten years later, the BBC announced a six-part sequel had been commissioned, titled Planet Earth II, the first television series produced by the BBC in Ultra-high-definition (4K). David Attenborough returned as narrator and presenter. A second sequel, Planet Earth III is currently announced and planned to air in 2022.