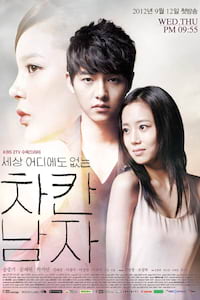 Smart and promising medical student Kang Ma-ru (Song Joong-ki) is deeply in love with his slightly older neighbor Han Jae-hee (Park Si-yeon), a television reporter. But when her situation takes a turn for the worse and Jae-hee becomes desperate to escape poverty, she meets a man who changes everything—a rich CEO who introduces her to a life of comfort. So she turns her back on Ma-ru, choosing money over love.

The brutal betrayal leaves Ma-ru fractured—not just angry, but a completely changed man. A few years later, Ma-ru is now 30 years old and works as a bartender and gigolo, no longer a "nice guy." He then meets Seo Eun-gi (Moon Chae-won), a young chaebol heiress who's being groomed to take over her father's conglomerate. Eun-gi is cold and calculating, business-savvy, and raised by her father to never show emotion to anyone.

Ma-ru decides to take revenge on his ex Jae-hee and bring her down from her position after his sister, Kang Cho-co (Lee Yu-bi) is rushed to the hospital because of Jae-hee. Ma-ru, though initially had no plans as such, uses Eun-gi to take revenge on Jae-hee Just when Ma-ru is beginning to love Eun-gi, she finds out the real reason why he approached her and they break up. But a car accident causes Eun-gi to lose her memory, and she enters Ma-ru's life again.

[About]
The Innocent Man is a 2012 South Korean television series starring Song Joong-ki, Moon Chae-won and Park Si-yeon. It is known on Netflix as Nice Guy.

It is a dark melodrama involving betrayal and romance.It aired on KBS2 for 20 episodes from September 12 to November 15, 2012.