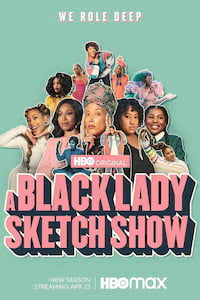 A Black Lady Sketch Show premiered with a season of six episodes on August 2, 2019, to "universal acclaim" according to review aggregator Metacritic. The first season received a 2020 TCA Award for Outstanding Achievement in Sketch/Variety Shows.

Though the second season was delayed due to the COVID-19 pandemic, it premiered April 23, 2021.