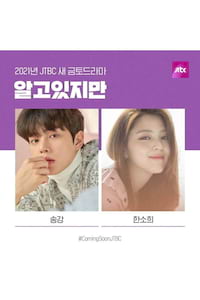 It depicts a hyper realistic romance between a man who is annoyed with relationships but likes to flirt and a woman who wants to date but does not believe in love.

[About]
Nevertheless is an upcoming South Korean television series starring Song Kang and Han So-hee. It is based on a popular webtoon of the same title which was first published on Naver Webtoon in October 2018. It is scheduled to premiere in June 2021 on JTBC.