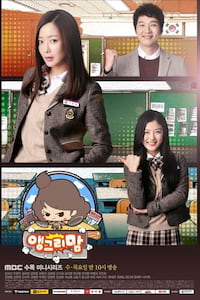 The protagonist, Jo Kang-ja (Kim Hee-sun) was once legendary for being the toughest, most feared troublemaker at her high school in Busan. Due to her pregnancy in her late teens, she drops out of school and tries to become a responsible mother to her daughter, Oh Ah-ran (Kim Yoo-jung). Fast-forward to the present, Kang-ja is now 34 years old and Ah-ran is a teenager attending high school. The two have a contentious relationship, with Ah-ran ashamed of Kang-ja's unrefined ajumma manners.

Meanwhile, in Myungsung High School, when Ah-ran befriends the class outcast Jin Yi–kyung, it makes her the target of the school bullies who make her life hell, yet she's too proud to tell her mother what's happening. When Kang-ja finds out that her daughter is getting bullied, she decides to take matters into her own hands. Unbeknownst to Ah-ran, Kang-ja enrolls in Myungsung High as an undercover student with the false name "Jo Bang-wool" to teach those bullies a lesson. But she ends up unraveling the darker problems within the educational system. Kang-ja makes it her mission to put a stop to the school violence, dig up the flaws of the education system, and school corruption at Myungsung High with the help of Ah-ran and naive, idealistic homeroom teacher Park No-ah.

[About]
Angry Mom is a 2015 South Korean television series starring Kim Hee-sun, Kim Yoo-jung, and Ji Hyun-woo. It aired on MBC from March 18 to May 7, 2015, on Wednesdays and Thursdays at 22:00 (KST) for 16 episodes. The screenplay won the Excellence Award at MBC's 2014 Script Contest