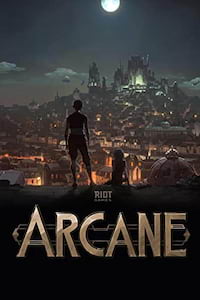 Arcane is an upcoming animated streaming television series set in the League of Legends universe. The series was announced at the League of Legends 10th Anniversary celebrations. It will be developed and produced by Riot Games, with animation services by Fortiche Productions. Originally set for a 2020 release, the show is rescheduled for a release in 2021 due to the COVID-19 pandemic. In May 2021, it was revealed that the show is scheduled to premiere in late 2021 on Netflix.

Set in the past, it retells the origin stories of several characters from Piltover and Zaun. Like the game which it is based on, Arcane is aimed at a "14+" audience and will deal with some more adult subject matter.