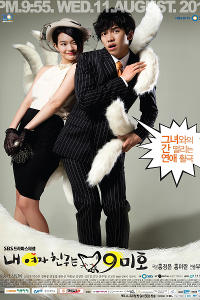 Cha Dae-woong (Lee Seung-Gi) is a normal college student, with ambitions of becoming an action star. One day, he accidentally releases a gumiho (Shin Min-ah), a legendary fox with nine tails who was sealed inside a painting by Samshin Grandmother. Fleeing the scene, Dae-woong suffers a life-threatening fall and is only saved by the gumiho giving him her "fox bead". When Dae-woong awakes and meets a mysterious and very beautiful girl, he initially treats her as eccentric or mentally ill, before she discloses that she is actually a gumiho in human form. According to myth, gumihos eat men's livers, so Dae-woong is scared out of his wits, and the gumiho takes advantage of his fear by sticking by his side. He names her "Mi-ho," and keeps her happy by buying her beef and hiding her true identity. Mi-ho wants nothing more than to become human, so they strike a deal: she'll lend him her mystical fox bead so that with his increased speed and strength, he'll be able to do difficult stunts, and in exchange he'll help her become human. As time passes, they get to know each other better and Dae-woong is charmed by how Mi-ho looks at the world with childlike wonder. [cont.]

[About:]
My Girlfriend Is a Gumiho is a 2010 South Korean romantic comedy television series starring Lee Seung-gi and Shin Min-ah. It aired on SBS from August 11 to September 30, 2010 on Wednesdays and Thursdays at 22:00 for 16 episodes.