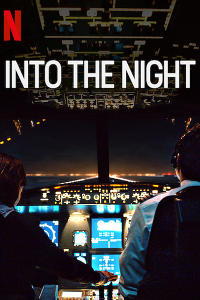 Into the Night is a Belgian apocalyptic sci-fi drama thriller web television series created by Jason George, inspired by the 2015 Polish science fiction novel The Old Axolotl by Jacek Dukaj. The series premiered on Netflix on May 1, 2020. It is Netflix's first Belgian original series. On July 1, 2020, the series was renewed by Netflix for a second season.

The series follows a group of people who are hijacked while on board a red-eye flight from Brussels. Terenzio (Stefano Cassetti), the hijacker, was an Italian NATO soldier. He forces his way onto the commercial aircraft and demands an early take-off. The handful of people in the aircraft becomes some of the survivors from a deadly global event that results from exposure to sunlight. The plane heads west in an attempt to survive this catastrophe that kills all living organisms during daylight hours. The group - led by Mathieu (Laurent Capelluto), the pilot, and Sylvie (Pauline Etienne), a passenger - must work together to keep the sun behind them. The group must deal with fuel shortage, irradiated food, hidden agenda, and other problems in their race to reach an underground military bunker.