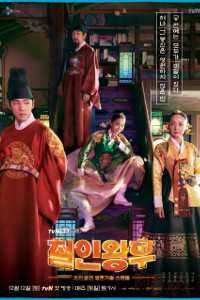 In the modern age, Jang Bong-hwan (Choi Jin-hyuk) is a chef who works for the country's top politicians at the Blue House. He has a free spirit, but he one day finds himself in the body of Queen Cheorin (Shin Hye-sun) in the Joseon period. King Cheoljong (Kim Jung-hyun), the reigning monarch, is a gentle and easy-going person. However, he is only king in name. Queen Sunwon (Bae Jong-ok), the late King Sunjo's wife, wields true power in the country and has relegated King Cheoljong to a figurehead. Her ambitious younger brother, Kim Jwa-geun (Kim Tae-woo), also desires power. Queen Cheorin soon discovers that King Cheoljong is not what he seems, and that he has a dark and suspicious side to him.

[About:]
'Mr. Queen' is a 2020 South Korean television series which aired on tvN. Directed by Yoon Sung-sik, it stars Shin Hye-sun and Kim Jung-hyun as the 25th queen and king of the Joseon Dynasty. Based on the original Chinese web drama Go Princess Go, the series is about a man named Bong-hwan from the modern age, being trapped in the body of Queen Cheorin in the Joseon era. It premiered on tvN on December 12, 2020 and airs every Saturday and Sunday at 21:00.