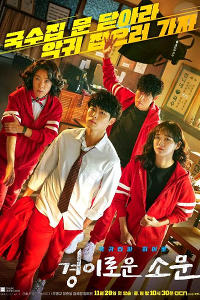 In the fictional city of Jungjin, a group of four demon-hunters called the Counters bear the arduous task of searching for and banishing evil spirits (akgwi) that escape from the afterlife to gain immortality. These evil spirits possess local human hosts who have committed murder or have a strong desire to murder, encourage their host's desire to kill, and consumes the spirit of the victim. The Counters were once under coma when a partner spirit from Yung, the boundary between the afterlife and the world of the living, possess them and give them perfectly healthy bodies and consciousness along with superhuman strength and supernatural abilities. Three of the Counters—Ga Mo-tak (Yoo Jun-sang), Do Ha-na (Kim Se-jeong) and Choo Mae-ok (Yeom Hye-ran)—pose as workers in Eonni's Noodles, a noodle restaurant which serves as their hideout. [cont.]

[About:]
The Uncanny Counter is a South Korean television series starring Jo Byung-gyu, Yoo Jun-sang, Kim Se-jeong and Yeom Hye-ran. Based on the Daum webtoon Amazing Rumor by Jang Yi, it centers on the titular character So Mun, a crippled high school boy who is enlisted to be part of the Counters, a group of demon-hunters who search for and fight against evil spirits that escape from the afterlife to prey on humans.

The first season aired on OCN from November 28, 2020 to January 24, 2021 on every Saturday and Sunday at 22.30 (KST) for 16 episodes. It is also available for streaming in selected countries on Netflix. The series became the highest rated OCN series so far.The series has been renewed for a second season.