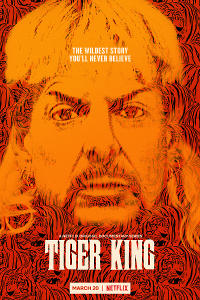 Tiger King: Murder, Mayhem and Madness (titled onscreen as simply Tiger King) is a 2020 American true crime documentary miniseries about the life of zookeeper Joe Exotic. It was released on Netflix on March 20, 2020. The series focuses on the small but deeply interconnected society of big cat conservationists like Carole Baskin, owner of Big Cat Rescue, and collectors such as Exotic, whom Baskin accuses of abusing and exploiting wild animals.

The series received positive reviews from critics, and became one of the most-watched original programs in Netflix's history.