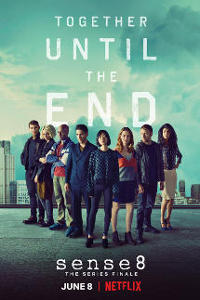 'Sense8' (a play on the word sensate /ˈsɛnseɪt/) is an American science fiction drama web television series created by Lana and Lilly Wachowski and J. Michael Straczynski for Netflix. The production companies behind Sense8 include the Wachowskis' Anarchos Productions (replaced by Lana and her wife's Venus Castina Productions in the second season), Straczynski's Studio JMS, and Georgeville Television, with Unpronounceable Productions having been set up specifically for this show.

All episodes of the first season of Sense8 were written by the Wachowskis and Straczynski; in the second season, Lilly Wachowski took a break from the show, and the episodes were written by just Lana Wachowski and Straczynski, with the exception of the series finale which was written by Lana, David Mitchell, and Aleksandar Hemon. Most of the episodes of the two seasons were directed by the Wachowskis (or just Lana, in the second season), with the remainder being divided between their frequent collaborators James McTeigue, Tom Tykwer, and Dan Glass. Lilly's break during the second season marked the first time in the sisters' career that they did not work together as a writing and directing unit. Sense8 was filmed almost entirely on location in a multitude of cities around the world.

The first season, consisting of 12 episodes, became available for streaming on Netflix on June 5, 2015, and was met with generally favorable critical reception. It became notable for its representation of LGBTQ characters and themes, winning the GLAAD Media Award for Outstanding Drama Series. It has also been recognized with a Location Managers Guild award for its use of locations as an integral part of the story, and a Primetime Emmy Award nomination for Outstanding Original Main Title Theme Music.