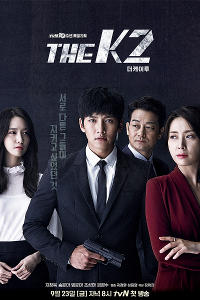 Kim Je-ha is a former mercenary soldier for the PMC Blackstone. While in Iraq, he gets framed for the murder of his lover Raniya, a civilian. As a result, he runs away and becomes a fugitive. He returns to South Korea and by chance, gets offered to work as a bodyguard by Choi Yoo-jin, the owner of JSS Security Company and wife of the presidential candidate, Jang-Se joon. He accepts the job in exchange for resources that he needs in order to get his revenge on another presidential candidate, Park Kwan-soo, who previously ordered the killing of his lover. In the meantime, Je-ha gets assigned to guard Go An-na, the hidden daughter of Jang Se-joon, whose life is always threatened because of Yoo-jin, her stepmother. An-na, who has been reclused and lonely all her life, starts relying on Je-ha, who shows concern for her and protects her at all costs. They slowly fall in love with each other, which makes Je-ha torn between having to work with his ally, Yoo-jin, in order to get his revenge and protecting his new found love, An-na, against his own ally. Eventually, Je-ha finally achieved his goal of revenge and have Park hanged himself for his atrocious acts and with Je-ha cleared his name, but at the price of both Jang Se-joon and Choi Yoo-jin's lives. The series end with Je-ha and An-na embracing each other in a foreign country, with An-na asking Je-ha what is his real name and Je-ha about to reveal it.