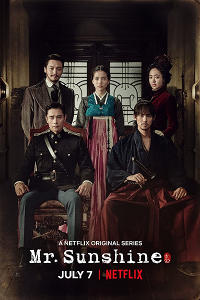 Mr. Sunshine is a 2018 South Korean television series written by Kim Eun-sook and directed by Lee Eung-bok, starring Lee Byung-hun, Kim Tae-ri, Yoo Yeon-seok, Kim Min-jung and Byun Yo-han. The series is set in Hanseong (the former name of Seoul) in the early 1900s, and focuses on activists fighting for Korea's independence. The series aired every Saturday and Sunday on tvN starting from July 7, 2018, and ended on September 30, 2018. It premiered internationally on Netflix. As of April 2020, it is the sixth-highest-rated Korean drama in cable television history.

Mr. Sunshine recorded the 6th highest ratings for cable television with its final episode reaching 18.129% and netting an average rating of 12.955%, which is the second highest average rating ever recorded for cable television. It received critical acclaim for its cinematography and storytelling. Critics praised the drama for its "deep storytelling" and its ability to raise viewers' awareness of history. The Korea Times applauded the drama for shedding light on those deemed peripheral in society, such as women and the lower classes, and for successfully laying out contradictions and hope in the fast-evolving late Joseon period; it also praised the shows strong female characters. Mr. Sunshine won the Drama of the Year award at the 6th APAN Star Awards, as well as Grand Prize for Lee Byung-hun.