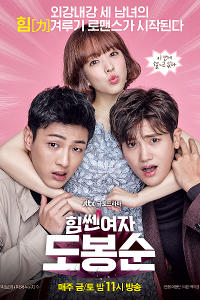 Do Bong-soon (Park Bo-young) was born with superhuman strength. Her strength is hereditary and passed along only to the women in her family. Her dream is to create a video game with herself as the main character. She desperately wants to become a delicate and elegant woman, which is the ideal type of her crush, In Guk-doo (Ji Soo), a police officer. Thanks to her strength, she gets a job as bodyguard to rich heir Ahn Min-hyuk (Park Hyung-sik), the CEO of a gaming company, Ainsoft. In contrast to Guk-doo, Min-hyuk is an eccentric man who is playful, a little spoiled, has no regard for rules, and dislikes policemen. He has recently received anonymous threats and has even been stalked, leading him to hire Bong-soon as his bodyguard after witnessing her beat up a bunch of gangsters at a construction site when they threatened an old elementary school bus driver.

A series of kidnapping cases happen in Dobong-dong, the district Bong-soon lives in, and she is determined to catch the culprit, who targeted her best friend. With help and training from Min-hyuk, she manages to control her strength to use it for good causes. Min-hyuk and Bong-soon find their relationship growing into something more. Their relationship at work and in pursuit of kidnapper creates comical and dangerous situations, which bring them closer.

[About:]
Strong Woman Bong-soon is a 2017 South Korean television series starring Park Bo-young in the title role as a woman with superhuman strength, with Park Hyung-sik and Ji Soo. It aired on JTBC from February 24 to April 15, 2017.

The series was a commercial hit and became one of the highest rated Korean dramas in cable television history.