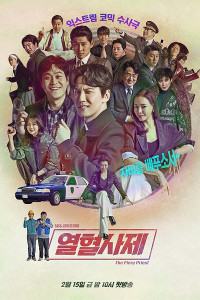 Following the mysterious death of an elderly priest, an EX NIS agent turned priest (Kim Nam-gil) attempts to bring the culprits involved before law.The hilarious journey in taking down the gangsters and corrupt officials in the city is what follows .The journey is not so smooth when the corrupt prosecuter of the city (Lee Ha-nee) refuses to cooperate.

[About:]
The Fiery Priest is a 2019 South Korean television series starring Kim Nam-gil, Kim Sung-kyun, Lee Hanee, Go Joon and Keum Sae-rok. It was the first drama to air on SBS's Fridays and Saturdays, airing from February 15 to April 20, 2019.

The Fiery Priest is the highest rated miniseries drama that aired in 2019 on public broadcast according to Nielsen korea.[4] The drama was a huge success and was one of the most popular dramas aired in 2019. Kim Nam-gil won numerous accolades for his portrayal of a priest with anger management issues. The action comedy drama also featured parodies from other movies and dramas, notably from Mr. Sunshine, Nameless Gangster: Rules of the Time, The Matrix, Reply 1988,Along with the Gods: The Two Worlds, The Scream painting etc.