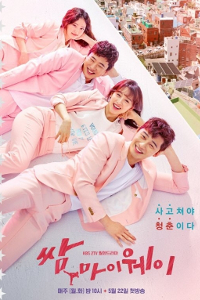 The story is about underdogs with big dreams struggling to survive and striving for success in a career they're under-qualified for. A long time friendship is blossoming into romance between two immature friends Ko Dong-man (Park Seo-joon) and Choi Ae-ra (Kim Ji-won) whose childish dynamic hasn't changed despite reaching adulthood.

[About:]
'Fight For My Way' is a South Korean television series starring Park Seo-joon and Kim Ji-won, with Ahn Jae-hong and Song Ha-yoon. It premiered on May 22, 2017 every Monday and Tuesday at 22:00 (KST) on KBS2.

The series was the slot leader during its entire run and topped TV popularity index for 3 consecutive weeks. It was praised for its realistic plot and great performance.