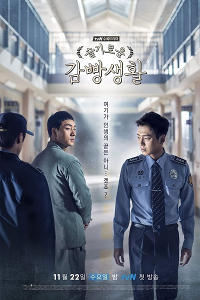 A captivating drama revolving around the lives of convicts behind bars, their families and duty officers working in the correctional facilities. A superstar baseball pitcher, Kim Je-hyuk, is convicted of assault after he saves his sister from a sexual attack.

[About:]
Prison Playbook is a 2017 South Korean television series directed by Shin Won-ho and starring Park Hae-soo and Jung Kyung-ho. The series marks Park Hae-soo's first-ever lead role. It aired on tvN from November 22, 2017, to January 18, 2018, on Wednesdays and Thursdays at 21:10 (KST) time slot for 16 episodes.