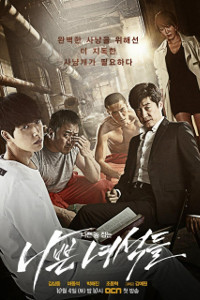 Detective Oh Gu-tak will use any means necessary to catch criminals, and his ambiguous moral line often results in him getting suspended for excessive force. Gu-tak comes up with a plan to form a team of "bad guys" to work on cases and hunt down other criminals, and with the rising number of violent crimes in their district, ambitious police inspector Yoo Mi-young signs off on the arrangement. Gu-tak releases three convicts from jail to form his team: Lee Jung-moon is the youngest member of Mensa with a genius IQ of 165 and doctorate degrees in math and philosophy, but behind his boyish facade is a psychopath serial killer; Pak Un-Cheol is a mob boss who crushed his way to the top of the gangster chain in 25 days, and still remains top dog in prison; and Jung Tae-soo was once a hired hit man who never made a single mistake, but suddenly confessed and turned himself in one day.