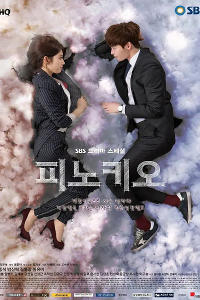 In the year 2000, Ki Ha-myung (Lee Jong-suk) is leading a happy life with his parents and elder brother Jae-myung, until his father Ki Ho-sang, the captain of the firefighting squad, dies in a factory explosion during a rescue attempt along with several of his men. When Ho-sang's body is initially missing, the media sensationalizes the case by scapegoating him. In a battle for ratings, cold and calculating MSC reporter Song Cha-Ok alleges that Ho-sang survived the blast, and is currently in hiding because he was responsible for the deaths of his men. This causes the Ki family to become outcasts in their neighborhood and objects of national scorn. Ki Ho-sang's wife kills herself and her younger son (Ha-myung) by jumping off a cliff, and the elder son, Jae-myung blames their deaths on the media, particularly Cha-ok.

But Ha-myung is alive, having been rescued from the water by Choi Gong-pil, a kind elderly man who lives on Hyangri Island. Gong-pil, who may either have Alzheimer's disease or trauma-induced memory loss, believes that Ha-myung is his older son Choi Dal-po, a simpleton who had died thirty years earlier. Ha-myung, who has no one else in the world, embraces the deception and treats Gong-pil as his father. Gong-pil officially adopts Ha-myung, now named Dal-po, and places him in the family register as his eldest son. Five months later, when Gong-pil's younger son Choi Dal-pyung moves to the island with his daughter Choi In-ha, they are flabbergasted to be told by Gong-pil to address a mere boy as their "older brother" and "uncle," respectively. Choi In-ha (Park Shin-hye) has "Pinocchio syndrome," which causes her to hiccup whenever she tells a lie. She idolizes her mother and hates living on the island after her parents' divorce. The fledgling friendship between Dal-po and In-ha is dashed, however, when he learns that In-ha's mother is none other than Song Cha-ok.

Five years later, In-ha and Dal-po are high school seniors and classmates at their small-town high school. Dal-po, who is a genius, pretends to be dumb (like the real Dal-po) and gets all zeroes in his test scores to keep up the deception in front of Choi Gong-pil. With his last-place class standing and scruffy, country bumpkin hair, Dal-po is friendless at school while In-ha is the most popular girl. Dal-po secretly likes In-ha, and he is forced to join a televised quiz show at first to prevent Ahn Chan Soo, who has a crush on In Ha, from confessing to her on national TV. At the TV studio, he runs into the show producer Hwang Gyo-dong, who had been a YGN reporter and one of Cha-ok's rivals but changed careers after what happened to the Ki family. After seeing Dal-po on TV, and despite knowing that her Pinocchio syndrome limits her career choices, In-ha decides to become a journalist.

In 2013, the Choi family has moved back to the city. In-ha has spent the last three years after college studying to become a reporter but continuously fails her job interviews; on the other hand, due to the poverty-stricken condition the Choi family is in, Dal-po is forced to work as a taxi driver to make ends meet. Cha-ok, who hasn't seen her daughter in a decade and is now MSC's nightly news anchor and section chief, fails In-ha at her final interview, saying a reporter with Pinocchio syndrome would be useless. Seeing how hurt In-ha is at her mother's rejection, Dal-po becomes determined to help her achieve her dream and announces that he wants to become a reporter as well. A month later, In-ha and Dal-po apply at YGN's "blind" audition for broadcast news reporters, but only Dal-po gets hired. When confronted by Gyo-dong, now-chief of YGN's news desk, Dal-po confesses his real identity as well as his real motive for taking the job: he wants to find his older brother Jae-myung and clear their father's name. But what he doesn't know is that Jae-myung has taken revenge on the factory workers who lied about their father by killing all of them and framing his last victim for the murders by hiding his body and making it seem like he is on the run. Meanwhile, with MSC's credibility rating at an all-time low, Cha-ok hires In-ha, using her Pinocchio syndrome in a publicity stunt. Thus, Dal-po and In-ha become rookies at rival networks, and among their colleagues are Seo Beom-jo, who comes from a rich, sheltered chaebol background and has a connection to In-ha via a wrong cellphone number, and Yoon Yoo-rae, once an idol sasaeng fan who now uses those obsessive and determined traits in her new job.[citation needed]

Later in her line of work, In-ha discovers Choi Dal-po's real identity is Ki Ha-myung and is disgusted by what her mother Cha-ok did to his family during the fire accident. In a lecture held by Cha-ok, In-ha stood up against her and in the process revealing to Jae-myung that Ha-myung, his dead brother, is actually alive. Together, they try to bring Cha-ok down through their honest news reporting all the while uncovering a bigger conspiracy in the news industry.

In China, the online broadcasting rights were sold at a record price of US$280,000 per episode, making it the most expensive Korean drama ever to be sold in China at the time. As of January 23, 2015, it has an accumulated view of 1 billion in Chinese video-sharing website Youku.