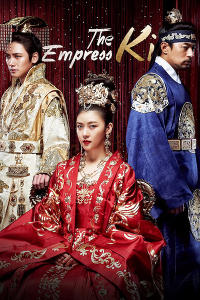 The Empress Ki is a South Korean historical drama television series starring Ha Ji-won as the titular Empress Ki. It aired on MBC from October 28, 2013 to April 29, 2014 on Mondays and Tuesdays at 21:55 for 51 episodes.

A domestic and overseas hit, the series received the Golden Bird Prize for Serial Drama at the 9th Seoul International Drama Awards. Ha Ji-won also won the Grand Prize at the MBC Drama Awards for her performance.

The series revolves around Gi Seungnyang, a Goryeo-born woman who ascends to power despite the restrictions of the era's class system, and later marries Toghon Temür (Emperor of Mongol Empire) to become an empress of the Yuan dynasty, instead of her first love, Wang Yu. It managed to highlight the deep love the Emperor embedded in Lady Ki and depicts her loves and political ambitions.