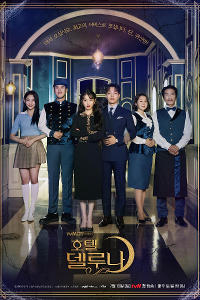 Hotel Del Luna(previously known as guest house of the moon) is not like any other hotel. A supernatural place, the hotel is not visible in its true form during the daytime as humans can only come across the hotel under special circumstances. Its staff and clients are all souls/ghosts coming to terms with unfinished business in their former lives before they pass on to the afterlife and cycle of reincarnation; the staff in particular have been there for decades and even centuries as they have not settled their grudges. The exception to this is the hotel general manager, which has been filled by a succession of human "passersby" since they need to interact normally with the real world in instances like paying bills or fulfilling ghosts' requests with still-living relatives/friends. Some of the more powerful or long-lasting ghosts can make themselves present among humans but they have to abide by the guidelines of the deities Mago and Grim Reaper; for instance killing a human being will usually result in the soul being destroyed without going on to the afterlife. Ghosts can see other ghosts and humans, however only a select few humans such as the Guest House of the Moon manager can see ghosts.

Jang Man-wol (Lee Ji-eun) is the owner of this hotel, that is located in Myeong-dong, Seoul. Due to a huge sin committed a millennium ago, the hotel catering to the dead has been bound to her soul. As a result of manipulation by the deity Mago (Yi-suk Seo), she meets Gu Chan-sung's father and makes a deal for his son to work for her after 20 years in return for his life and money. With his new found fortune and life, his father takes Gu Chan-sung (Yeo Jin-goo) abroad where the young man grows up as a sincere perfectionist who is level-headed, but also has a soft heart. He comes back to South Korea after his father's death to be an assistant manager at a multinational hotel corporation, only to face Jang Man-wol, after which he ends up fulfilling the agreement and becomes the manager of Hotel Del Luna.

Through Gu Chan-sung, the audience is introduced to the mysteries and the secrets behind the Hotel and its owner.

[About:]
Hotel del Luna is a 2019 South Korean television series, starring Lee Ji-eun and Yeo Jin-goo as the owner and manager, respectively, of the eponymous hotel that caters only to ghosts. Produced by GT:st, written by the Hong sisters and directed by Oh Choong-hwan, it aired on tvN from July 13 to September 1, 2019.

It had an estimated budget of 16-20 billion won.It was the most viewed tvN drama of 2019, making it one of the highest-rated Korean drama in cable television history.