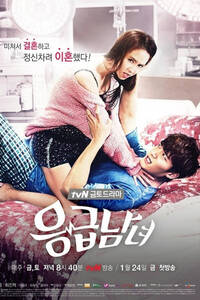 While in their early twenties, a medical school student, Oh Chang-min, and a dietitian, Oh Jin-hee, fall in love and marry despite his family's strong opposition. Chang-min comes from a family of wealthy, successful doctors who believe Jin-hee is not good enough for him, prompting them to cut him off financially after he marries her. In order to earn money right away, Chang-min gives up his dream of becoming a doctor, and instead becomes a pharmaceutical salesman. He is miserable at his job, while Jin-hee's inferiority complex deepens as her husband's family continues to look down on her. They begin to fight constantly and eventually get a divorce. Six years later, Chang-min has gone back to med school to pursue his dream, while Jin-hee has also put herself through med school. They end up as interns at the same hospital, where they will have to work in the emergency room together for three months..

[About:]
'Emergency Couple' is a 2014 South Korean television series starring Song Ji-hyo and Choi Jin-hyuk with Lee Pil-mo, Choi Yeo-jin and Clara. It aired on cable channel tvN from January 24 to April 5, 2014 on Fridays and Saturdays at 20:40 for 21 episodes. The romantic comedy/medical drama is about a divorced couple whose tumultuous feelings for each other are rekindled when they become reunited years later as interns at the same hospital.

Due to the popularity of the drama, it was extended by one episode. Broadcasting rights of the drama were also sold to 9 countries. A special music talk show titled Reply with Music - Emergency Couple was aired on May 6, 2014, to thank the audience for their support.