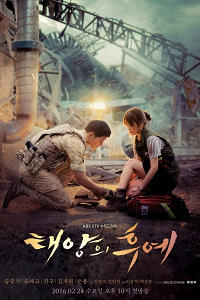 Yoo Si-jin (Song Joong-ki) is the captain of a South Korean Special Forces unit. He and his friend Master Sergeant Seo Dae-young (Jin Goo) are off-duty when they witness a young man stealing a motorcycle and apprehend him. The thief, Kim Gi-bum (Kim Min-seok), is injured during the chase and therefore sent to the hospital. Dae-young realizes his cell phone was stolen by the thief and goes to the hospital along with Si-jin to retrieve it.

In the emergency room, Si-jin meets Dr. Kang Mo-yeon (Song Hye-kyo) for the first time, and is instantly attracted to her. Mo-yeon mistakenly assumes Si-jin is part of the thief's criminal gang after hearing him being addressed as "Big Boss", which is actually his call sign. He proves his identity with the help of army surgeon Yoon Myung-ju (Kim Ji-won). [cont.]

[About:]
Descendants of the Sun is a 2016 South Korean television series starring Song Joong-ki, Song Hye-kyo, Jin Goo, and Kim Ji-won. It aired on KBS2 from February 24 to April 14, 2016 for 16 episodes. KBS then aired three additional special episodes from April 20 to April 22, 2016 containing highlights and the best scenes from the series, the drama's production process, behind-the-scenes footage, commentaries from cast members and the final epilogue.

The series was a major hit in South Korea where it drew a peak audience share of 38.8%. It received several awards, such as winning the Grand Prize in television at the 52nd Baeksang Arts Awards; and was named the Most Popular Show of the year by Korea Broadcasting Advertising Corporation.

The show was broadcast across Asia where it was hugely popular, and has been credited with a rise in tourism to Korea. Local adaptations has aired in the Philippines and Vietnam, and an adaptation is planned in China. The actors in the show also received international recognition.