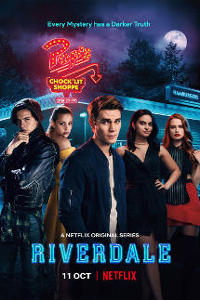 13+ Teen Drama, Mystery
Be the first to rate this

Riverdale is an American teen drama television series based on the characters by Archie Comics. It was ordered to series at The CWin May 2016, and the 13-episode first season premiered on January 26, 2017, and concluded on May 11, 2017. It was adapted for television by Archie Comics' chief creative officer Roberto Aguirre-Sacasa and executive produced by Greg Berlanti.

The series follows Archie Andrews' life in the small town of Riverdale while exploring the darkness hidden behind its seemingly-perfect image.