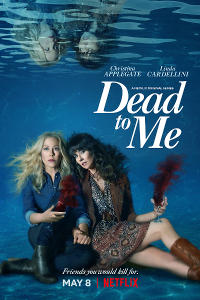 Dead to Me is an American black comedy web television series created by Liz Feldman which premiered on May 3, 2019 on Netflix. It stars Christina Applegate and Linda Cardellini as two grieving women who bond during therapy, and it is executive produced by Feldman, Will Ferrell, Adam McKay, and Jessica Elbaum. The first season received positive reviews. In June 2019, Netflix renewed the series for a second season which was released on May 8, 2020. At the 71st Primetime Emmy Awards, Applegate received a nomination for Outstanding Lead Actress in a Comedy Series.

Dead to Me is about a powerful friendship that blossoms between Jen (Applegate) and Judy (Cardellini). Jen is a recently widowed real estate agent trying to come to terms with her loss through therapy, exercise, and other methods. She uses anger and resentment as an outlet for her grief.

She meets Judy in a therapy group for bereft spouses. Jen mourns her husband, who was killed by a hit-and-run driver, while Judy grieves for her fiancé, who died of a heart attack.

The two characters face their loss differently as Jen finds herself in a dark place, struggling with her grief, while Judy maintains a positive disposition. This difference quickly leads to a deep bond between the two. However, Judy keeps a dark secret that causes a disturbing plot twist. Jen becomes more unhinged as she unravels the mystery of her husband's death and secret life.