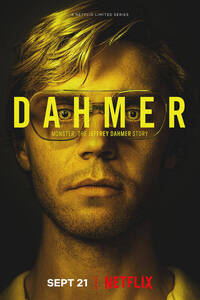 Dahmer – Monster: The Jeffrey Dahmer Story is an upcoming American limited biographical crime drama series co-created by Ryan Murphy and Ian Brennan, set to premiere on Netflix on September 21, 2022. The series follows the murders of infamous serial killer Jeffrey Dahmer, portrayed by Evan Peters, and is told from a point of view style through the lens of his victims.